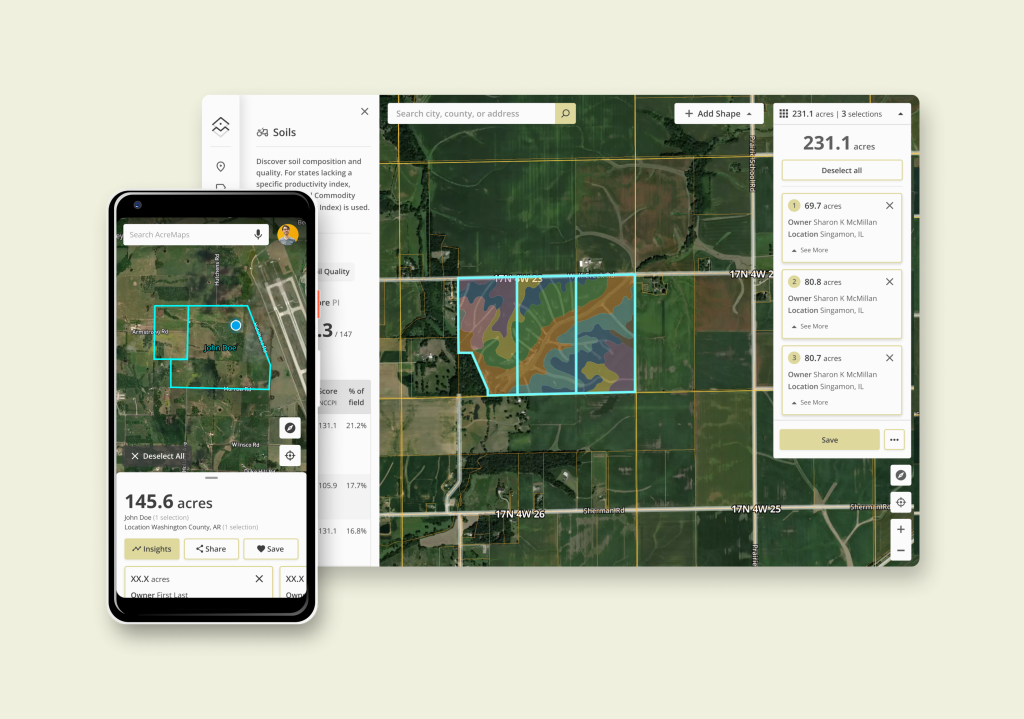 • Four months as the sole UX Designer on AcreMaps.
• Current state includes collaboration with a product owner, two other designers, and a team of six developers.

AcreTrader (AcreMaps parent company) utilizes proprietary technology to facilitate the buying and selling of farmland, one of the largest U.S. real estate sectors, exceeding $3 trillion in value. Through AcreTrader’s internal underwriting process, we realized there was a large and underserved market for farmland analysis and appraisal. Our product vision is to see a world where every farm is bought and sold at a fair price.

Buying and selling farmland is often an uncommon, opaque, and difficult task. Our user needed a way to more easily and transparently discover and evaluate farmland.

Empower our customers to buy and sell land smarter with advanced technology, data, and expertise.

To begin our product discovery phase, I conducted both quantitative and qualitative research in collaboration with a product manager. The primary goal of our research was to gain insight into the user journey of anyone interested in buying and selling farmland, specifically focusing on the analysis and evaluation stage of the process. Through surveys and interviews, we were able to hone in on a handful of personas, gaining clearer insights on their specific pain points.

• First, what’s your occupation? What do you do all day?
• What does your farmland valuation process look like?
• When you are analyzing your own farmland, how important is it to you to have an accurate valuation range for your property?

In addition to user surveys, we also conducted interviews with farmers, brokers, and farmland analysts. Interviews were documented and we returned to these sessions frequently during our product discovery process. These interviews included the following questions—

• Roughly how many hours a week would you say you spend using the internet, including web browsing and email, at work and at home?
• What kinds of sites do you look at when you browse the web?
• Do you have experience with mapping tools and, if yes, which have you used?

Through our surveys, we were able to gain insight into the current marketplace for farmland analytics tools. We used this data to conduct a competitor analysis. During this process, we gained a deeper understanding into common features and patterns. We also identified potential areas for disruption.

User survey statistics were explored graphically, corroborating the results from our competitor analysis.

Finally, all this data was synthesized into larger buckets–

I used affinity mapping to organize key findings, which later became the feature requirements for our MVP. From here we were ready to move on to the definition stage.

• The Farm Analyst
• The Expanding Farmer
• The Farmland Broker

After sitting through farmland underwriting sessions conducted by our internal analysts, key patterns began to emerge. These sessions included quick context switching between many platforms (Hubspot, AcreValue, PDFs, MapRight, Surety, Excel, etc) in order to provide clients timely information while they had them on the phone.

From these sessions, common pain points emerged, including—

• Constant context switching to access relevant data
• No way to export or share insights
• Data summaries were difficult to access, especially when working between various layers

“My top priority is to find and source undervalued farms to purchase. I don’t have time to spare, so I need to be able to analyze potential farm leads accurately and quickly.”

After compiling interview data and looking through user sessions, we discovered that our biggest problems to solve for included minimizing navigation between tools to evaluate data sets, providing a way to quickly export a data report or summary, and a lack of robust searching or selection interfaces, especially when working between various layers. These findings mapped well with the affinity mapping buckets from our empathizing stage (speed, navigation, analysis, sharing).

Task analysis was performed and user flows were created to help understand essential screens needed for the application. The following user flows represent two major features AcreMaps had to try to solve for—

I built screens, tested them, and vetted them with business stakeholders and representatives from our persona groups. These were built in whimsical before moving on to mid and high fidelity wireframes.

Many user flows benefited from prototyping—I discovered very quickly that designing for a mapping interface necessitated a lot of complex interaction.

Elements for higher fidelity wireframes were primarily built in Adobe Illustrator and Adobe Photoshop, while screens and interactions were built out in Figma.

I conduct usability testing for AcreMaps on a feature-by-feature basis.

One of the first major usability tests I performed was around navigation. For this test, I wanted to make sure we had representation from our user groups, so I gathered a sample of three farm analysts, three farmland brokers, and one expanding farmer. Users were assigned situational tasks and their behavior was observed. I presented four high fidelity prototypes to these individuals, collecting qualitative data through recording and documenting these sessions.

The goal of this usability test was to identify the learnability of the application for new users on desktop. These tests aimed to highlight any issues while observing the user completing basic navigational tasks.

User testing sessions are varied based off the hypotheses and KPIs we are trying to solve for. The specific sessions around navigation included the following tasks—

In this specific navigational test, users overwhelmingly preferred the option which gave them the most freedom to select parcels and layers simultaneously. This was at odds with my hypothesis, and so proved to be a very valuable insight.

Each feature on AcreMaps is designed within a similar framework. Our discovery process begins with user interviews, feedback is analyzed, and we use it to make decisions on both new feature work and refining existing elements. Read about the draw polygon feature for an AcreMaps case study focused on another facet of our tool.

The style and branding of AcreMaps represents an earthy aesthetic while seeking to maintain the highest accessibility standards. One thing that showed up again and again in our user research was the need for low-vision accessibility. Many of the farmers we were targeting were using smaller screens with weaker eyesight, and I wanted to design with their needs in mind. To accomplish this, all color combinations and type weights needed to pass AAA accessibility standards.

Due to the complex functionality of any geospatial tool, we needed to utilize some custom UI elements alongside traditional patterns. At the same time, I was intentional about considering Jakob’s Law–

“Users spend most of their time on other sites. This means that users prefer your site to work the same way as all the other sites they already know.”

With this in mind, I was thoughtful never to stray too far from universal design patterns.

With limited product manager resources on many AcreMaps sprints, one of my responsibilities for every new feature developed is to create a seamless handoff file for our developers. Additionally, I write JIRA tickets with relevant Acceptance Criteria in order for the development team to understand, create, and QA test any feature work.

Early on in working with the AcreMaps team, in order to make sure this process continued to run smoothly, I developed the following workflow for our team. This has been our resource for assessing the right order to complete feature work, and has been its own reward in the organizational benefits we have gained.

Through continual user interviews, we have confirmed our original hypothesis and helped to make buying and selling farmland more common, more transparent, and easier.

Our product has been fully adopted by our internal analysis and brokerage teams. There are over 1,500 sign ups weekly for our tool, which is in a BETA testing period for desktop, and is currently being developed for mobile. The process has been iterative, with continual user feedback gathered daily from our internal users and BETA testers.

The following is a recording of one of our farm analysts showcasing all the ways he currently utilizes the tool.

Based on the findings from both UX research and validation sessions, we have a list of feature sets we are working to include in further iterations of our product. Our BETA testing period has brought us even more insight into true user needs.

During this process, we quickly understood that further development would require a strong business case to raise a large enough investment to gain momentum. In January 2022, the AcreMaps BETA was able to help in securing $60 million in VC capital for AcreTrader’s Series B funding round. AcreMaps is planning a public launch in 2022.

Current state user interviews indicate a strong preference for AcreMaps against our competitors. We hear frequent positive feedback on our data quality and ease of use.

Thank you! Additionally, you can download the PDF version.

iThere are no comments

Begin typing your search above and press return to search. Press Esc to cancel.